This article is published from Tech4gamers.com and is for information only, they have some great articles, please visit their site and give them a like.

The PCIe 4.0 was the prominent feature during AMD’s introduction of their Ryzen third generation desktop CPUs and a new chipset as they are the first one to introduce the PCIe 4.0 for the desktop users. PCIe 4.0 has doubled the bandwidth that PCIe 3.0 specification offers taking it to 64 GB/s from 32GB/s. This is a whopping figure offering more throughput than ever. Only the AMD’s X570 chipset based motherboards are coming with PCIe 4.0 slots and to achieve the 4.0 functionality, one would need AMD’s third-generation Ryzen CPUs. Earlier AIB partners of AMD teased that selected motherboards in X470 would be provided a limited PCIe 4.0 support with the BIOS update.

As can be seen from the above table, the PCIe 4.0 standard or specification is supporting a transfer rate of 16 GT/s which results in 64 GB/s total bandwidth and approximately 2 GB/s per lane (single). Everything here is doubled as compared to the PCIe 3.0 standard. As expected the PCI 4.0 is the backward compatible meaning if you would want to use PCIe 3.0 device on the motherboards with PCIe 4.0 support, it will work. Similarly, a PCIe 4.0 device will work on motherboards with PCIe 3.0 support.

Let me digress here to answer a simple question easily for a few who asked. The PCIe slots are listed as X1, X4, X8, X16. The number followed by X is showing the number of lanes available for that slot. Each lane has two pairs of wires. One pair is to receive the packet and the other is to send the packet. The packets move across the lane at the rate of 1-bit per cycle.

The above picture now includes the X570 chipset in the overall scenario.

The above picture further scales down the X570 chipset showing the breakup of the PCIe 4.0 lanes from the chipset. We have a total of 16 PCIe 4.0 lanes in the chipset which includes the 4x lanes for interconnect.

We have to look at the PCIe Gen 4.0 functionality in two departments which are the gaming performance and the high-speed storage connectivity. This is a part I of the content where I will be testing if the PCIe 4.0 has any impact on the gaming performance and in part II I will test the high-speed storage using the PCIe Gen 4.0 interface. Does PCIe Gen 4 bring any significant improvement in gaming performance over the Gen 3? This is the exact question that I will be addressing in this content. In my opinion, there won’t be a difference as such as we have not even saturated the full PCIe 3.0 bandwidth. Still, let’s find it out.

Following is the test bench configuration:

I have set the FCLK to 1600 manually in the UEFI settings. My 3600MHz with CL16 kits are stuck in Canada otherwise I would have used the same.

AMD driver Adrenalin 2020 Edition 20.2.2 was used for all tests. Display Driver Uninstaller (DDU) was used to remove the complete traces of any previous installation before installing the drivers.

MSI Afterburner 4.62 was used to monitor and record the FPS for the games without in-built benchmarks.

Following games have been benched: 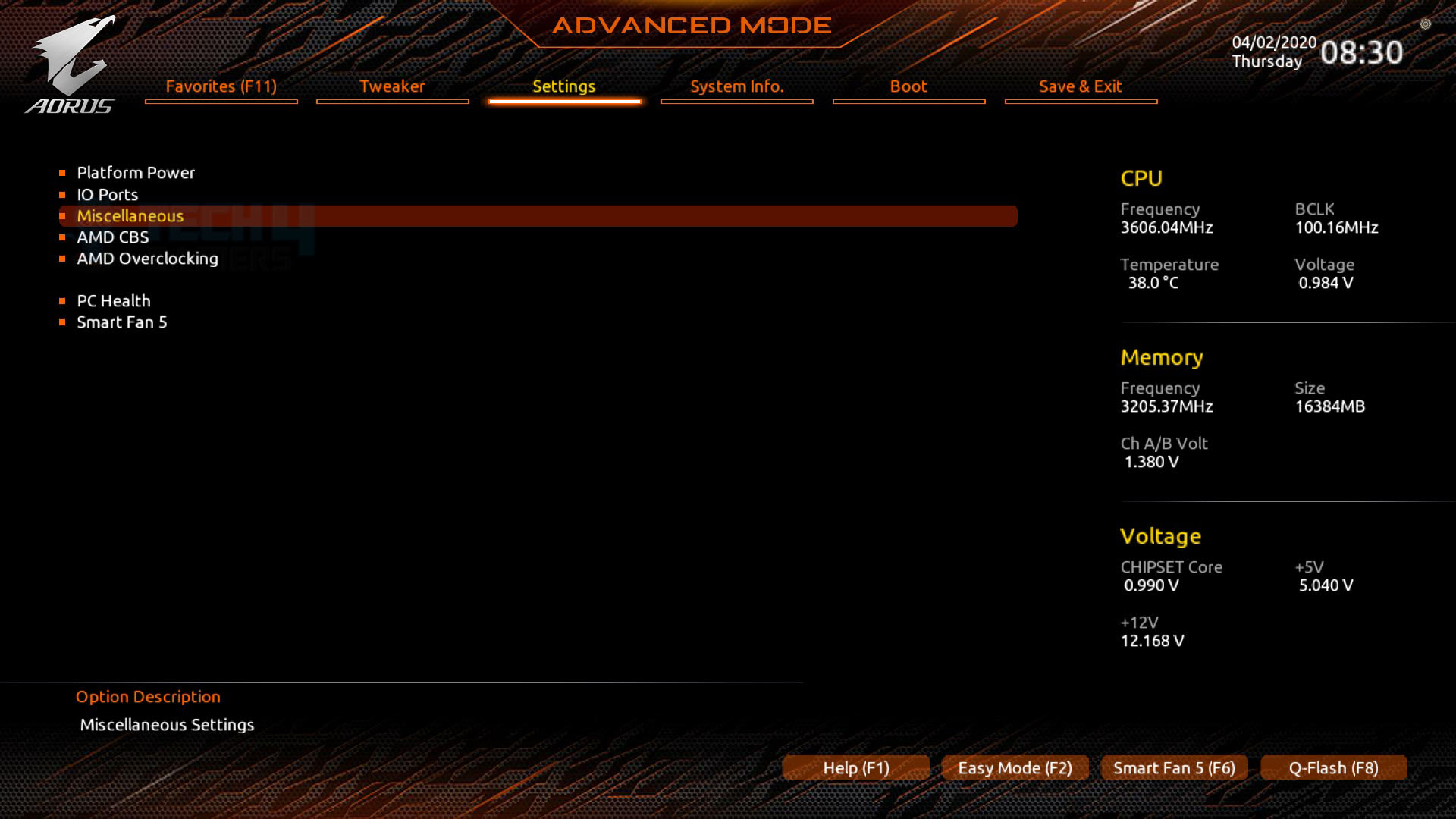 To switch between the Gen 3 and Gen 4, go to the UEFI/BIOS by pressing Del key of F2 at the startup. Once inside the UEFI, go to the Settings menu. You will find the Miscellaneous option there. Click on it. 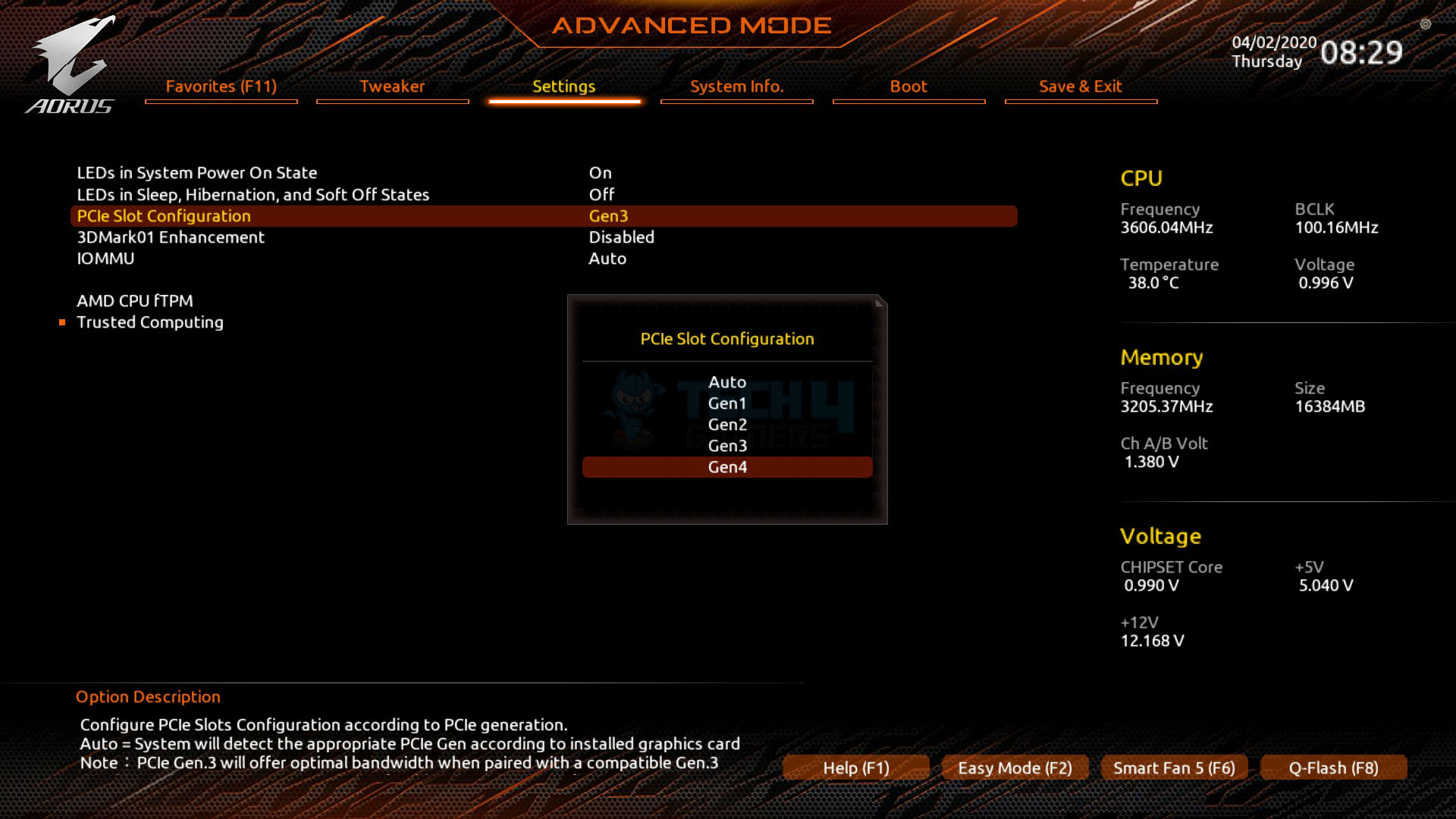 In the submenu, there will be a setting named PCIe Slot Configuration. It will be set at Auto. Here Auto means that the slot will be set to 3.0 or 4.0 mode based on the native graphics device interface. Clicking the Auto, you will get a dropdown menu. You can set the slot configuration for any generation from there. I have set it to Gen 3 and after completing the testing on it, I changed it to Gen 4.

Please, note that the above settings are from the GIGABYTE/AORUS UEFI/BIOS. If you are using other manufacturer’s motherboard, refer to the user manual to identify the proper setting for switching between the PCIe generations.

Let’s take a look at the results: 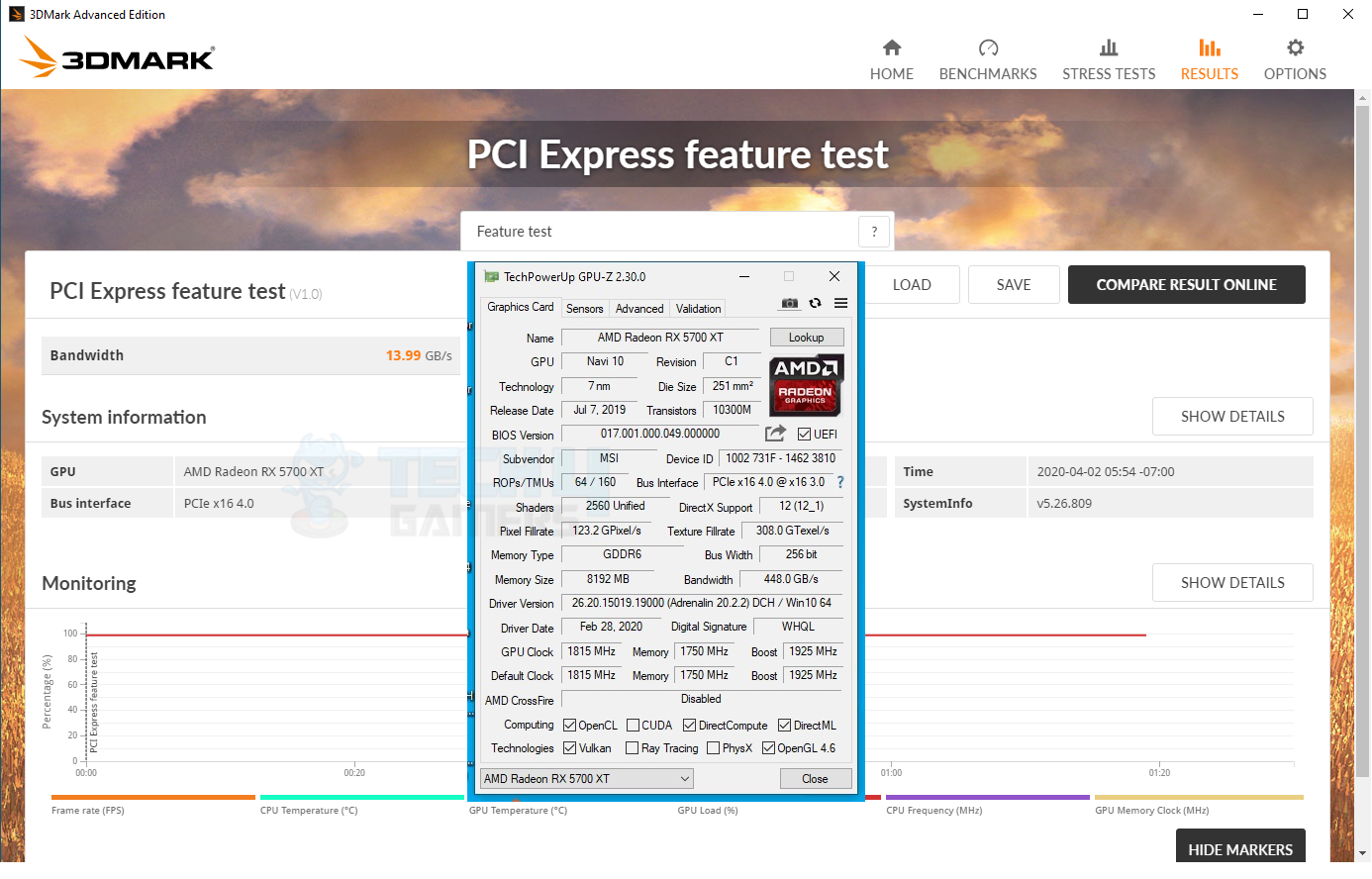 The test results in 13.99 GB/s bandwidth when ran on PCIe Gen 3. For confirmation, I have also shown the TechPowerUp GPU-Z snapshot. The bus interface can be seen set at x16 3.0. 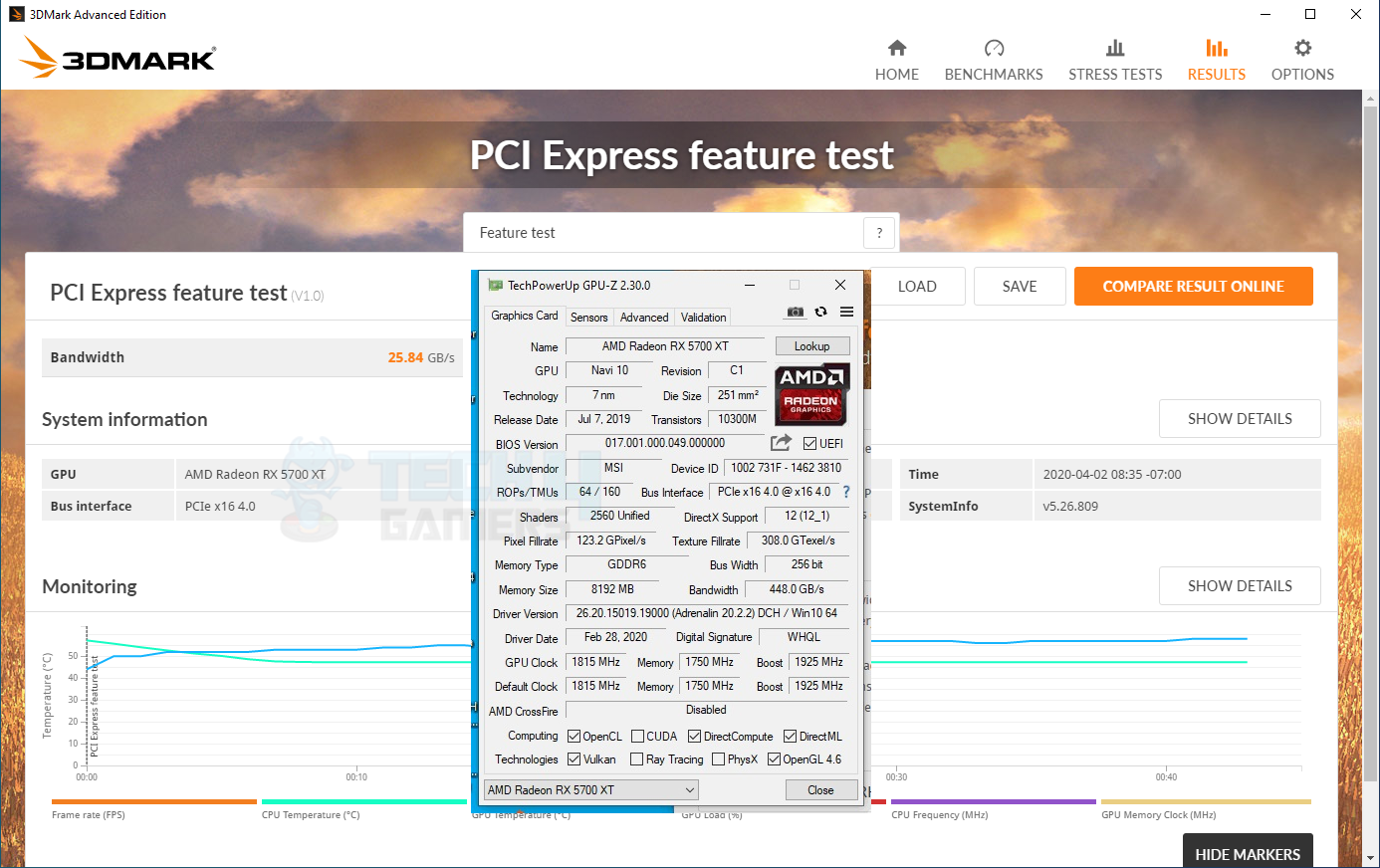 The test results in 25.84 GB/s bandwidth when ran on PCIe Gen 4. Again, for confirmation, I have shown the TechPowerUp GPU-Z snapshot showing the bus interface of x16 4.0. 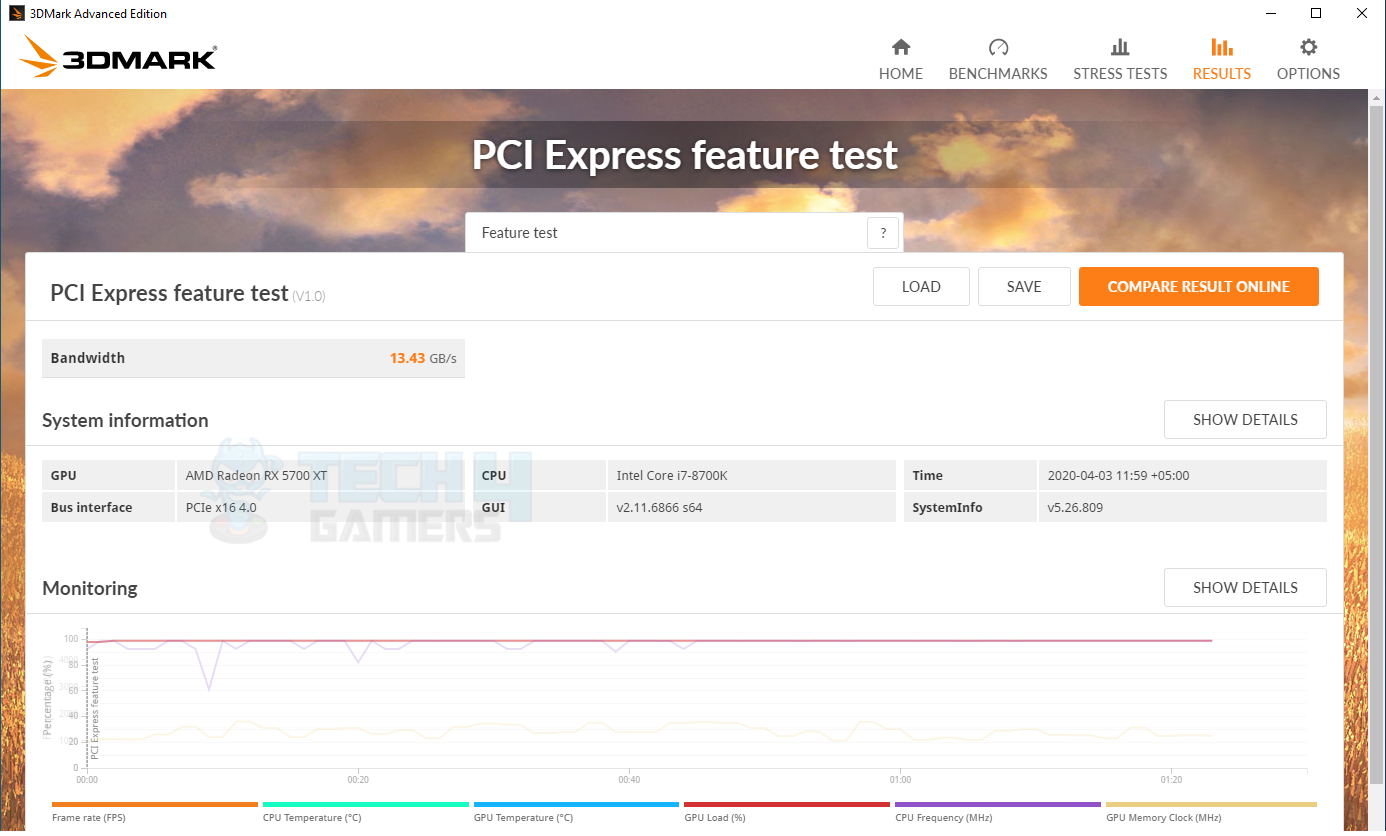 Since we only have PCIe Gen 3.0 standard on the Intel-based configurations. For cross confirmation, I have also run this test on Intel i7 8700k using ASUS Strix Z390-E Gaming motherboard using the same graphics card. This result is confirming the result obtained when we set the AORUS motherboard to run on PCIe Gen 3.0.

One thing to remember here is that these tests are showing the results of the generation differences only from the x16 PCIe slot. 64 GB/s is the combined throughput. The rated throughput for the PCIe 3.0 x16 is 15.75 GB/s whereas it is 31.51 GB/s for the PCIe 4.0 x16. 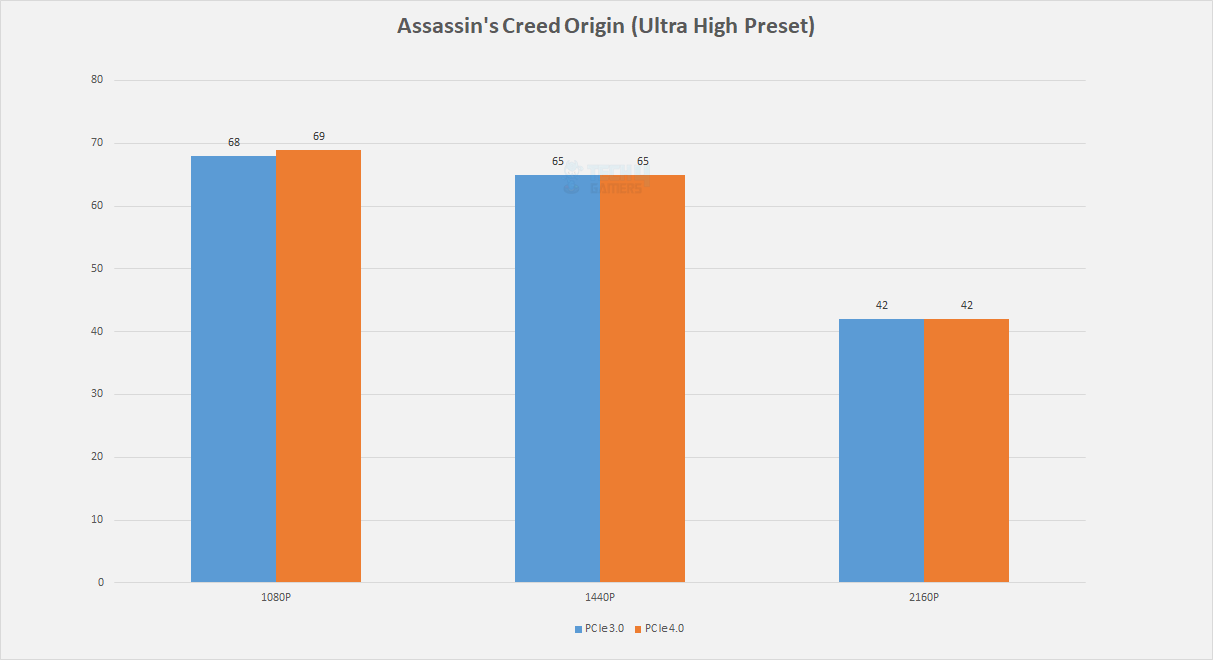 As such no difference was observed in this game at both PCIe generations. 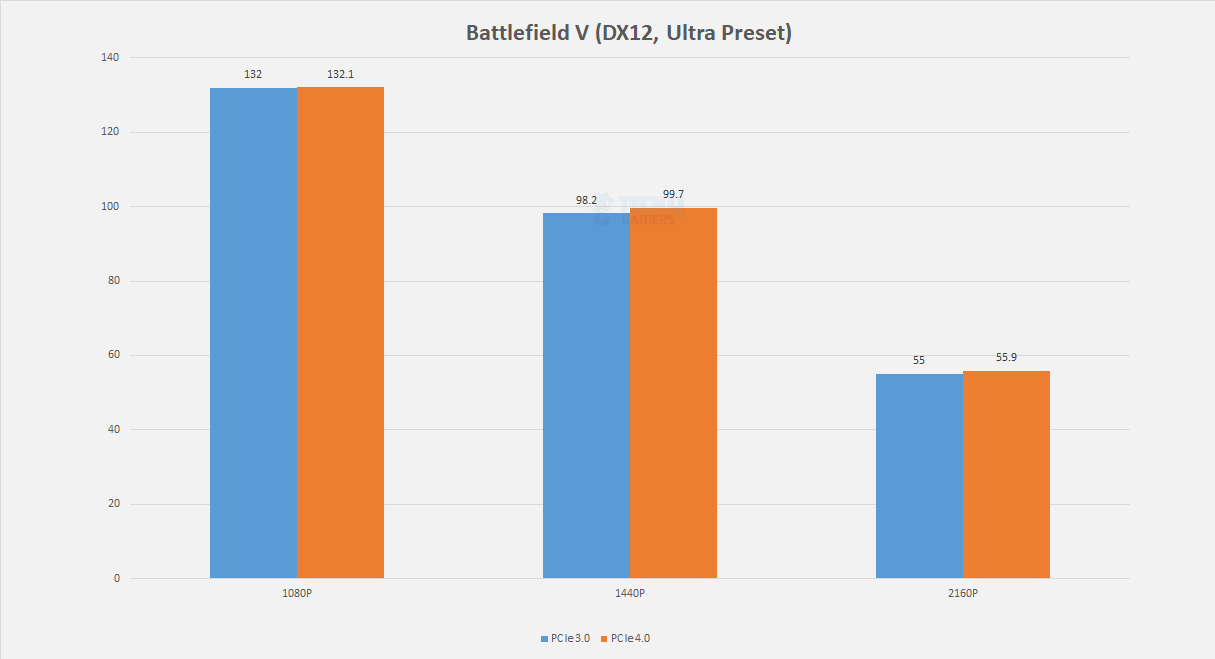 Again, we are seeing no difference to report. 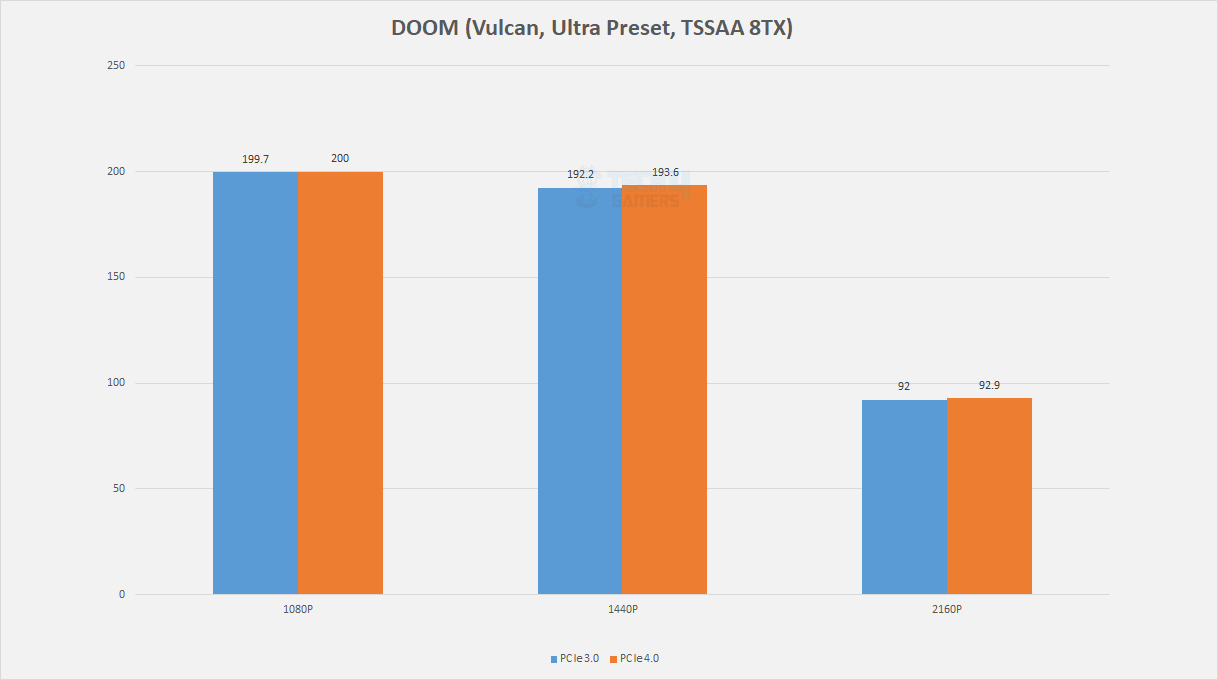 A difference of a mere 2.3 FPS is not enough to conclude anything and is within the margin of error. 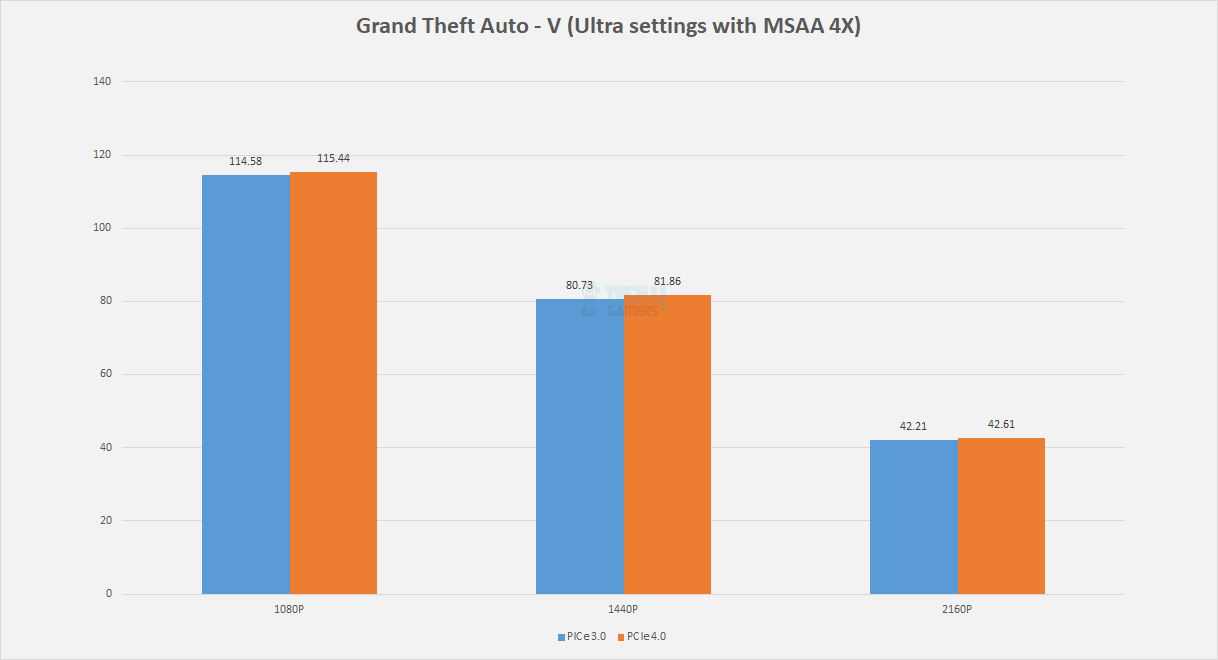 No difference here as well. 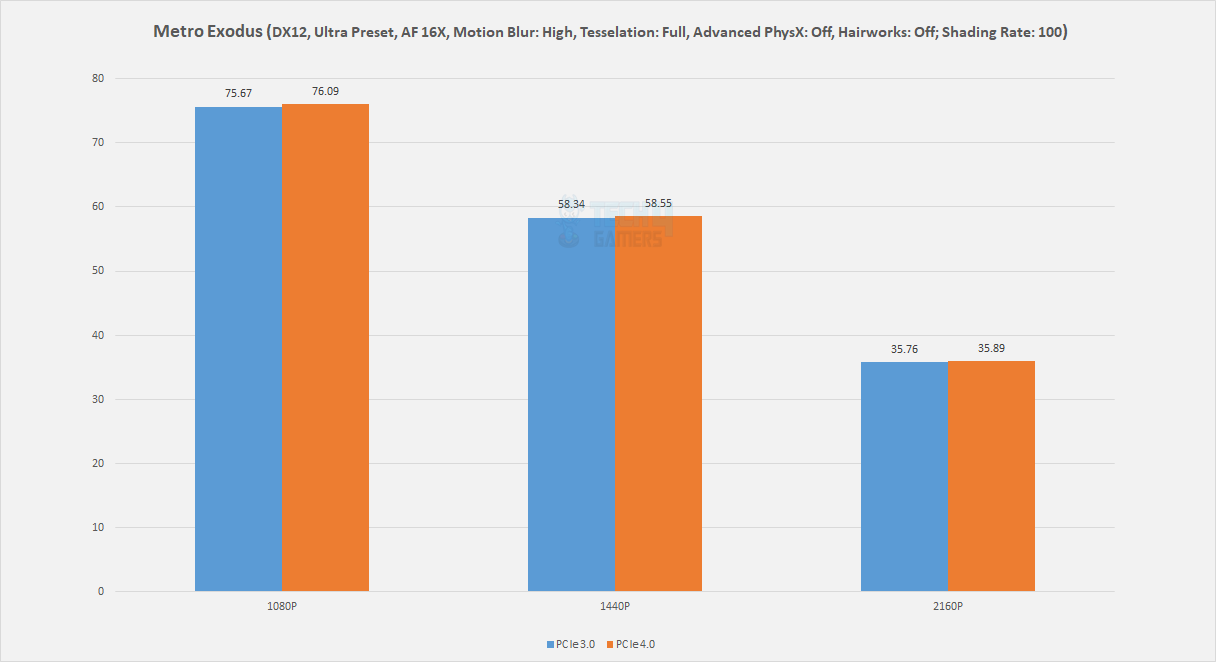 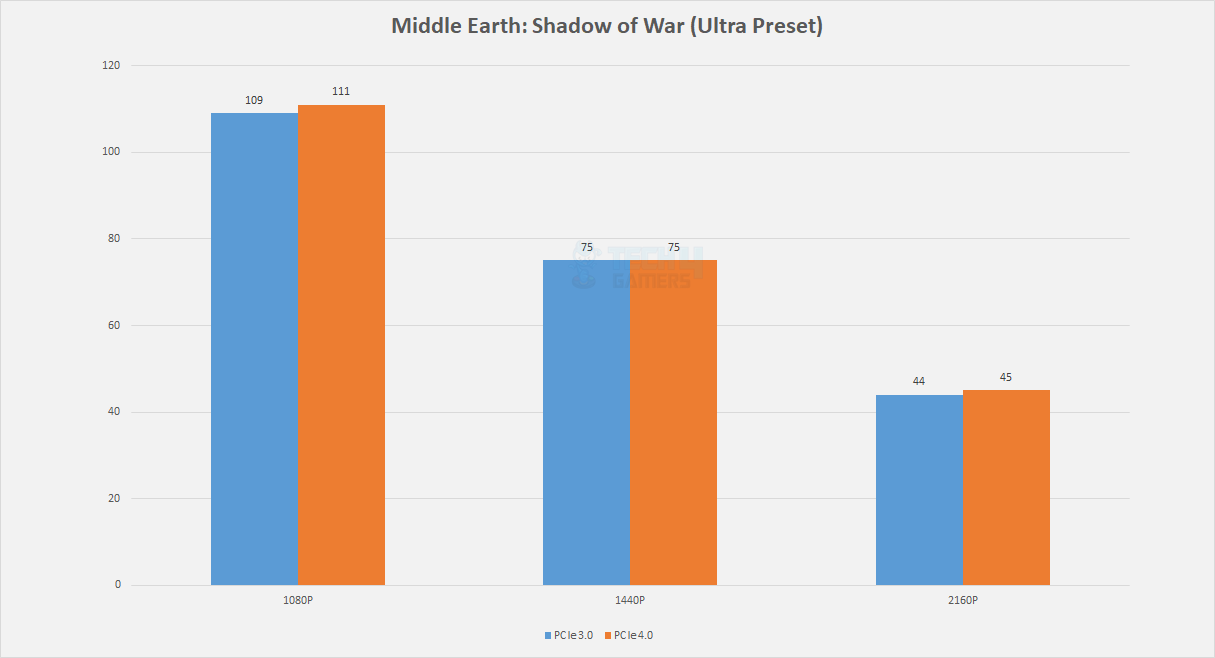 A mere difference of 2 FPS is nothing conclusive. 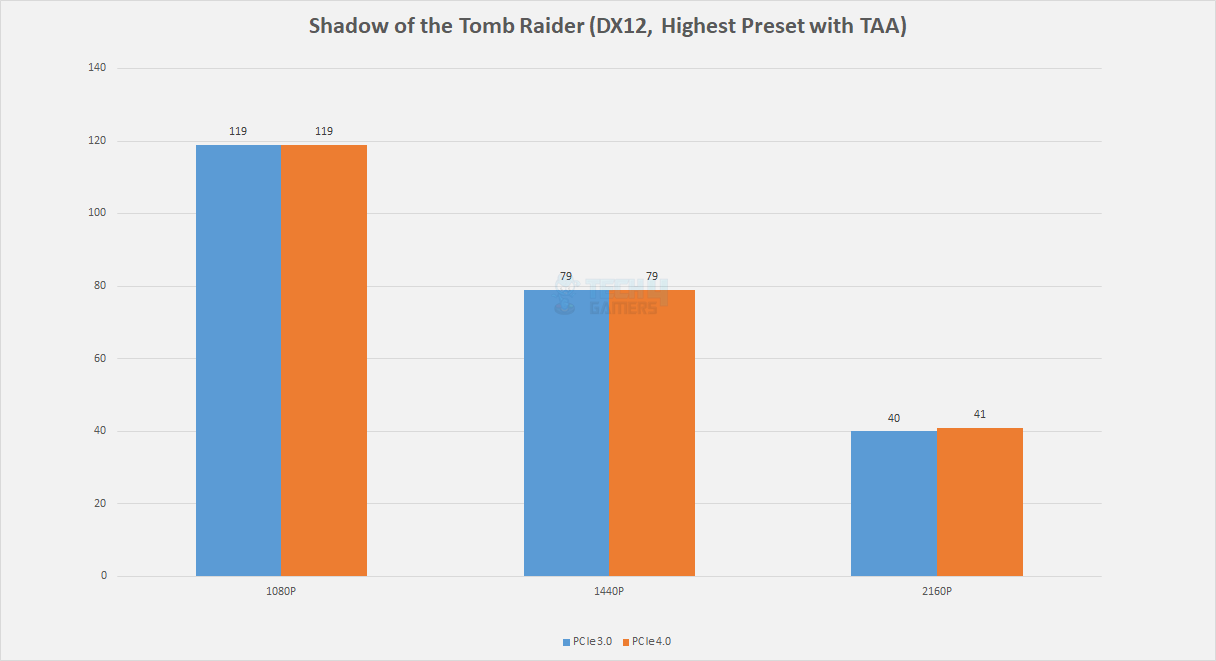 Again, we are seeing no difference. 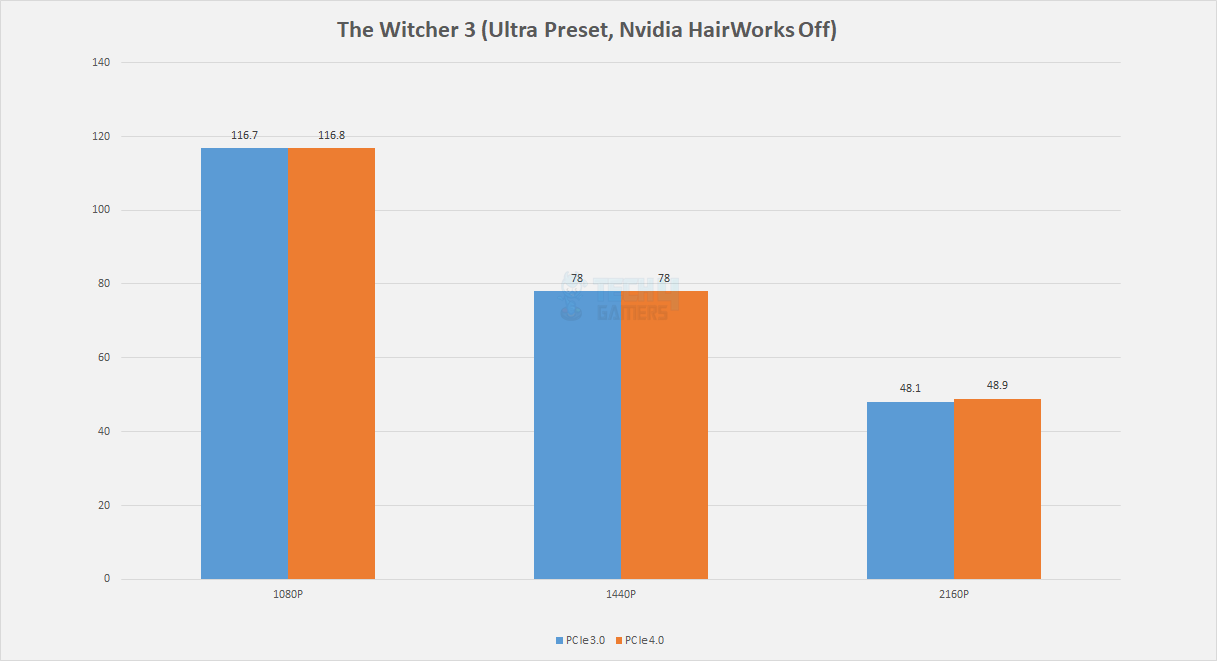 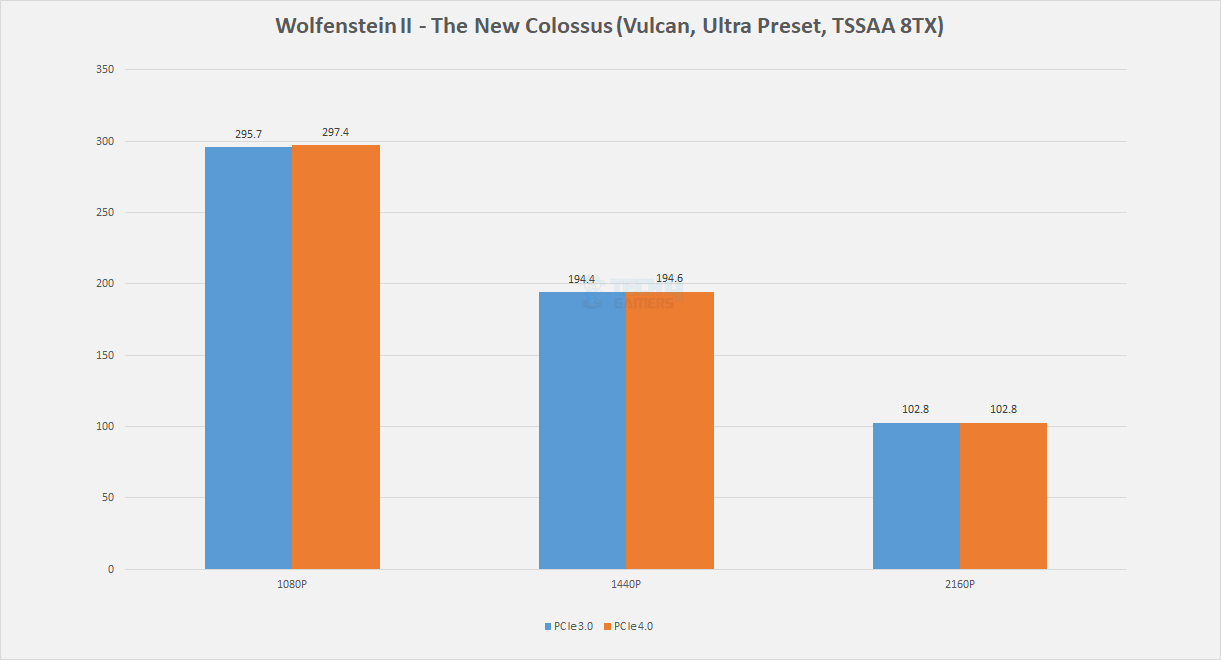 The same result was observed in this game as well. 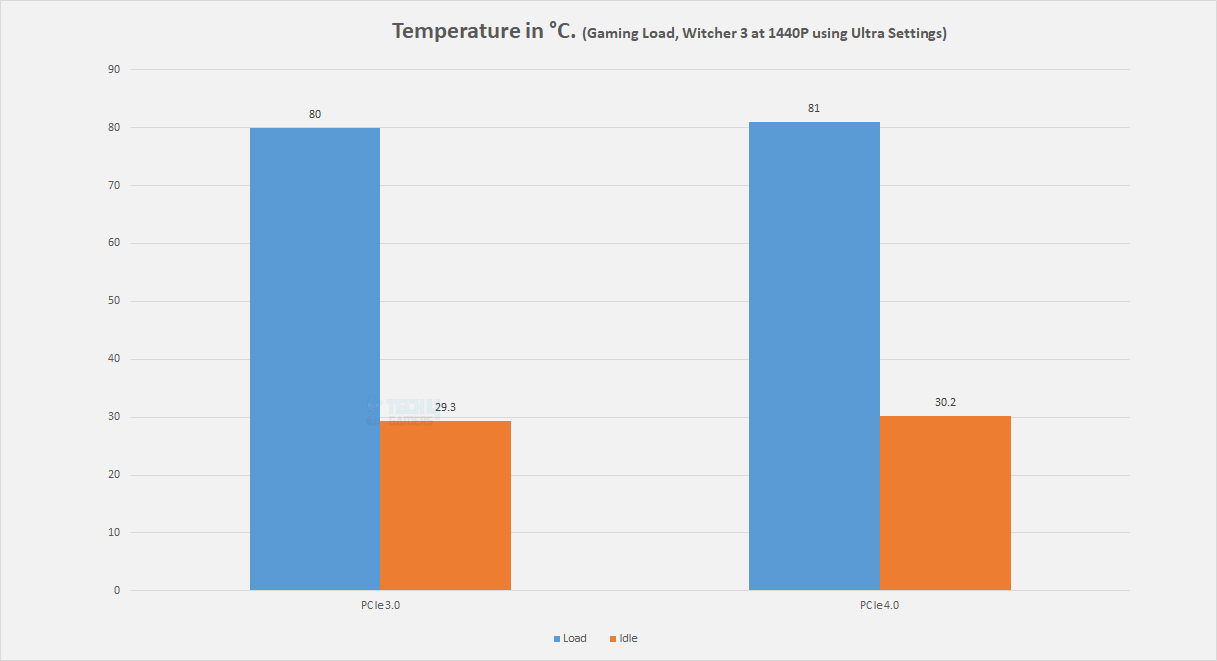 There was no difference as such on the thermals of the graphics card in both sets of the testing. The temperature reading was taken after a 30 minutes gaming session of Witcher 3: The Wild Hunt on 1440P at Ultra settings. The reading from the MSI AfterBurner was counter checked with the reading from the HWInfo64. 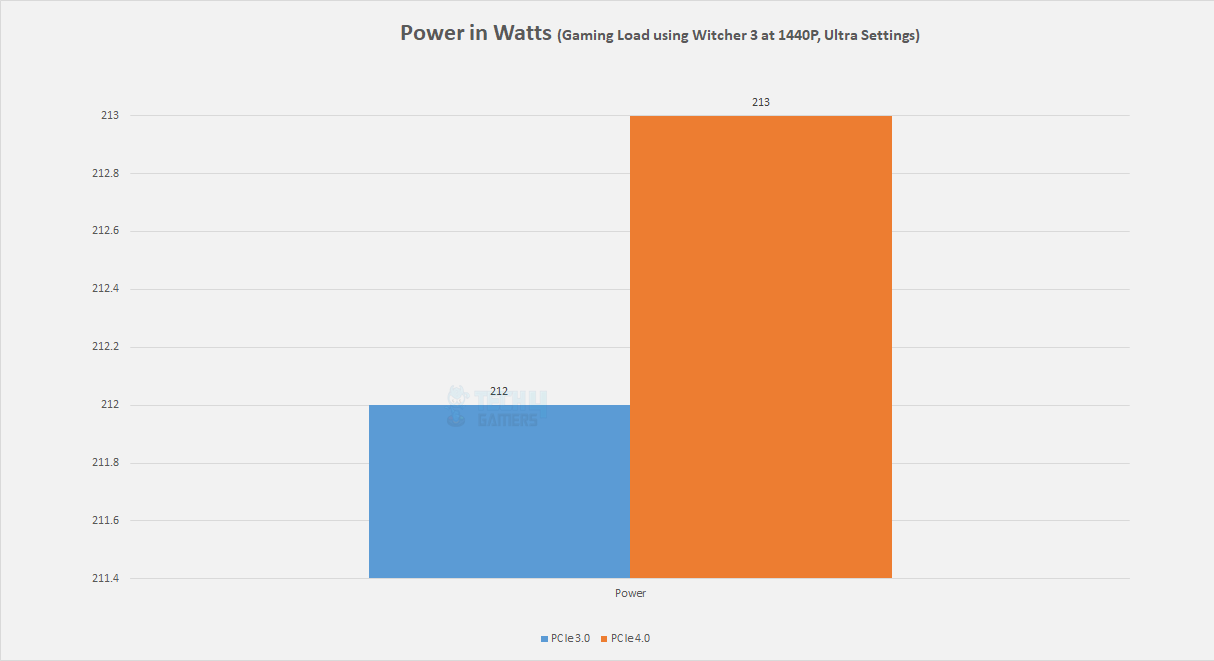 Similarly, there was no difference in terms of the power being utilized by the graphics card in both sets of the testing. The power reading was taken after a 30 minutes gaming session of Witcher 3: The Wild Hunt on 1440P at Ultra settings. The reading from the MSI AfterBurner was counter checked with the reading from the HWInfo64.

Based on our testing using the PCIe 4.0 Ready graphics card, we can see that there is no gaming performance boost or improvement yet when using the PCIe 4.0 standard over the PCIe 3.0 standard. As I have mentioned above that this is one aspect of the PCIe Gen 4. There is a high-speed storage aspect which I think would yield some fruitful results on the PCIe Gen 4. I will be doing some testing after securing the Gen 4 based SSD to put in writing the Part-II of this content. Till that time, Nauman is signing out.